Revolution Slider Error: Slider with alias other2 not found.
Maybe you mean: 'home-slider-multi' or 'BSSL' or 'conference-slider' or 'other'

This is the first in a series of blog posts that will discuss key technical considerations on the Twinkle spacecraft design. These posts will provide an insight into technical aspects of the mission and will cover a range of engineering topics. Here we introduce our orbit selection, the impact of Earth’s obstruction and how many exoplanet science targets are accessible within the field of regard.

Twinkle is a space-based spectroscopic observatory that will operate simultaneously across the visible and infrared wavelengths, enabling the characterisation of exoplanet atmospheres, solar system objects and stellar targets. We take a new approach on delivering Twinkle: we focus on maximising technology heritage and cost-effectiveness, without the added public body remit of driving forward engineering and technological innovation. For additional information on our approach see the “Mission” page.

Selecting the right orbit for Twinkle

In selecting an orbit for Twinkle there were several primary concerns that needed to be considered: the thermal stability of the orbit, the cost of launch and the impact of the orbit on observations due to Earth obstruction. Feeding into the cost concern is the impact of the radiation environment on the spacecraft systems and the overall mass and size of the spacecraft when determining launch costs.

A number of potential orbits have been considered for Twinkle, each of which has been reviewed to understand its benefits and drawbacks. One option was to send the spacecraft to the second Lagrange point (L2), which has been used for a number of missions (e.g. Herschel, Planck) and will be used in the near future for Euclid, JWST and ARIEL. From a thermal perspective, L2 would be an ideal orbit, with negligible Earth flux, stable solar conditions and little to no variability with seasons or years. L2 is, however, a costly orbit to reach with a harsh radiation environment that would require radiation-hardened electronics. More bespoke orbits, such as the one used by TESS, or one which is Earth trailing/leading (e.g. Spitzer, Kepler), were also considered but suffer from the same issues as the L2 option. 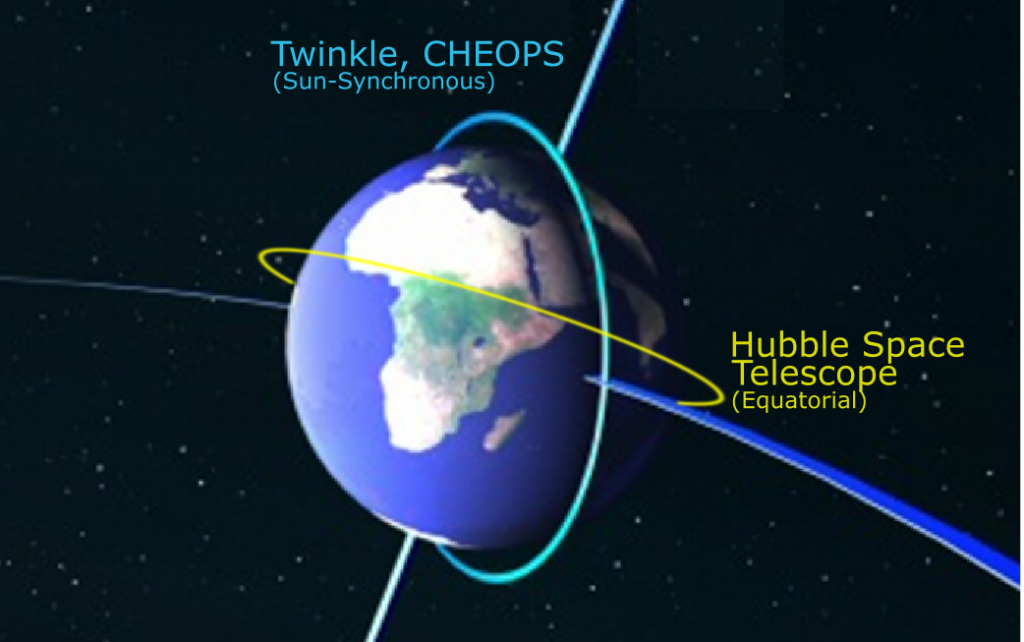 Low Earth Orbits (LEOs), typically defined as those with an altitude of less than 2,000km, [have a more benign radiation environment], are more affordable to reach than MEO or GEO altitudes and have also been used for many astrophysics missions. The Hubble Space Telescope operates in an equatorial LEO while CHEOPS operates in a dawn-dusk sun-synchronous LEO. Some other recent scientific satellites to have operated in a LEO include CoRoT, AKARI and WISE/NEOWISE.

After considering the various options, a dawn dusk sun-synchronous LEO similar to the CHEOPS spacecraft was selected. Twinkle orbits the Earth along the terminator, pointing away from the Sun along the Sun-Earth vector (see Fig 1). This orbit tightly constrains the Sun-Spacecraft-Earth geometry, providing the highly stable thermal environment that is essential for maintaining the cryogenic temperatures necessary for infrared spectroscopy. Viewed from the Earth, sun-synchronous orbits are those where the spacecraft always passes overhead at the same time of day, meaning that the orbit of the spacecraft needs to shift each day as the Earth rotates around the sun. Given that there are 365 days a year, the satellite has to shift its orbit by approximately one degree per day to maintain the same angle of the orbital plane to the sun. For a well-chosen altitude and inclination this shift is natural; it is caused by the fact that the Earth is an oblate spheroid, wider at the Equator, causing additional gravitational forces to act on the satellite.

LEOs also offer the least onerous radiation environment besides L2, which further helps to reduce the complexity of the spacecraft design and, as a result, the overall mission cost.

With LEO selected the primary parameter left to consider is altitude, with the final determination to be made once construction starts. After reviewing several small launch vehicles and determining a preliminary mass budget with the industrial suppliers, an orbit altitude of 700 km was baselined and this blog post considers that altitude in the analysis shown.

Shielding constraints on Field of Regard

The Twinkle spacecraft makes use of a sun-shield to reject incident flux from the sun. The design also makes use of thermal blankets on the telescope and ensures that the shields are also shaped to minimise Earth flux. Considering the mechanical design of the spacecraft and the constraints of fairing size on launch, we have defined the field of regard of Twinkle to be ± 40◦ from the anti-sun vector.

Each day the plane of the orbit of the spacecraft, relative to the stars, processes by just under 1°. This means that the stars visible to the field of regard change each day. This is compounded when we consider seasonal variations. The geometry of the orbit with respect to the sun changes throughout the year as the sun rises and falls along the ecliptic plane. This change in Earth Obstruction can be seen visually in Figure 2; during the spring periods the orbit is more closely aligned with the perpendicular plane of the sun vector, while during winter the two planes are more separated causing more cases of Earth obstruction. 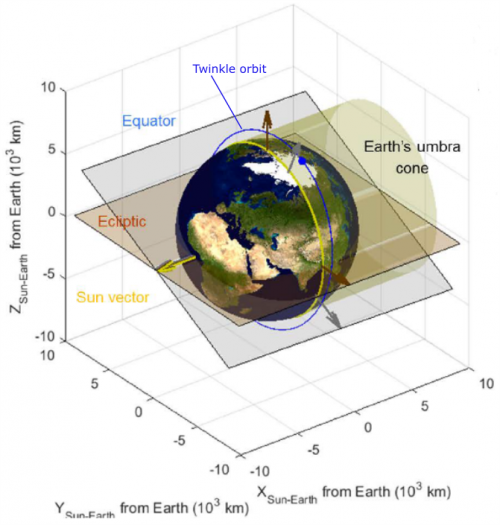 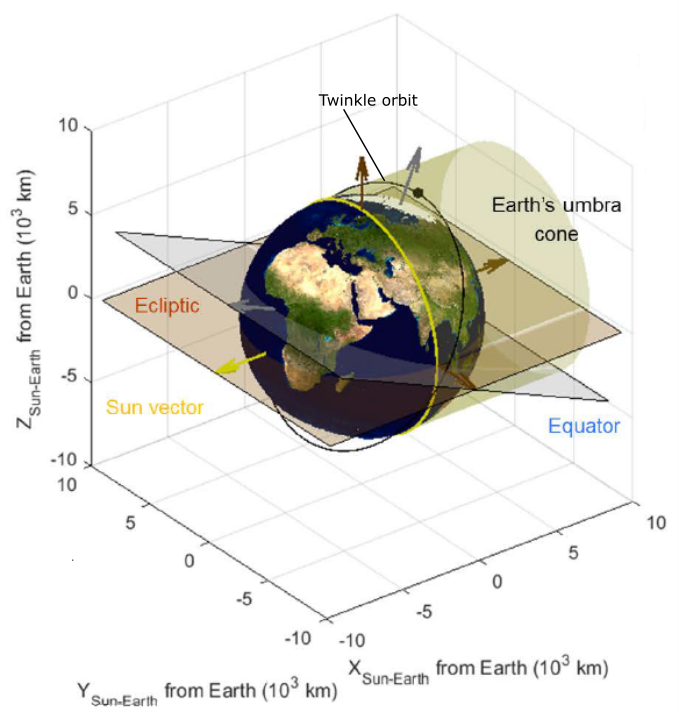 For a telescope orbiting at 700 km, the Earth occupies a significant portion of the sky and must be considered when reviewing what is observable day to day. The further a target is from the ecliptic plane, the larger the angle from the anti-sun vector, and the closer to an Earth limb the target becomes. Beyond ~25° inclination from the ecliptic, the observation will begin to be directly obstructed by the Earth for parts of each orbit and periodic slewing by the spacecraft will be required to avoid observing the Earth.

This means that in order to determine when targets can be best viewed by Twinkle one must consider the time of year during scheduling. The further a target is from the ecliptic plane, the more restricted its availability for unobstructed observations. For targets closer to the ecliptic the overlap of daily fields of regard is larger and there will be more days per year when the target is observable with Twinkle – this can be seen in Figure 3. 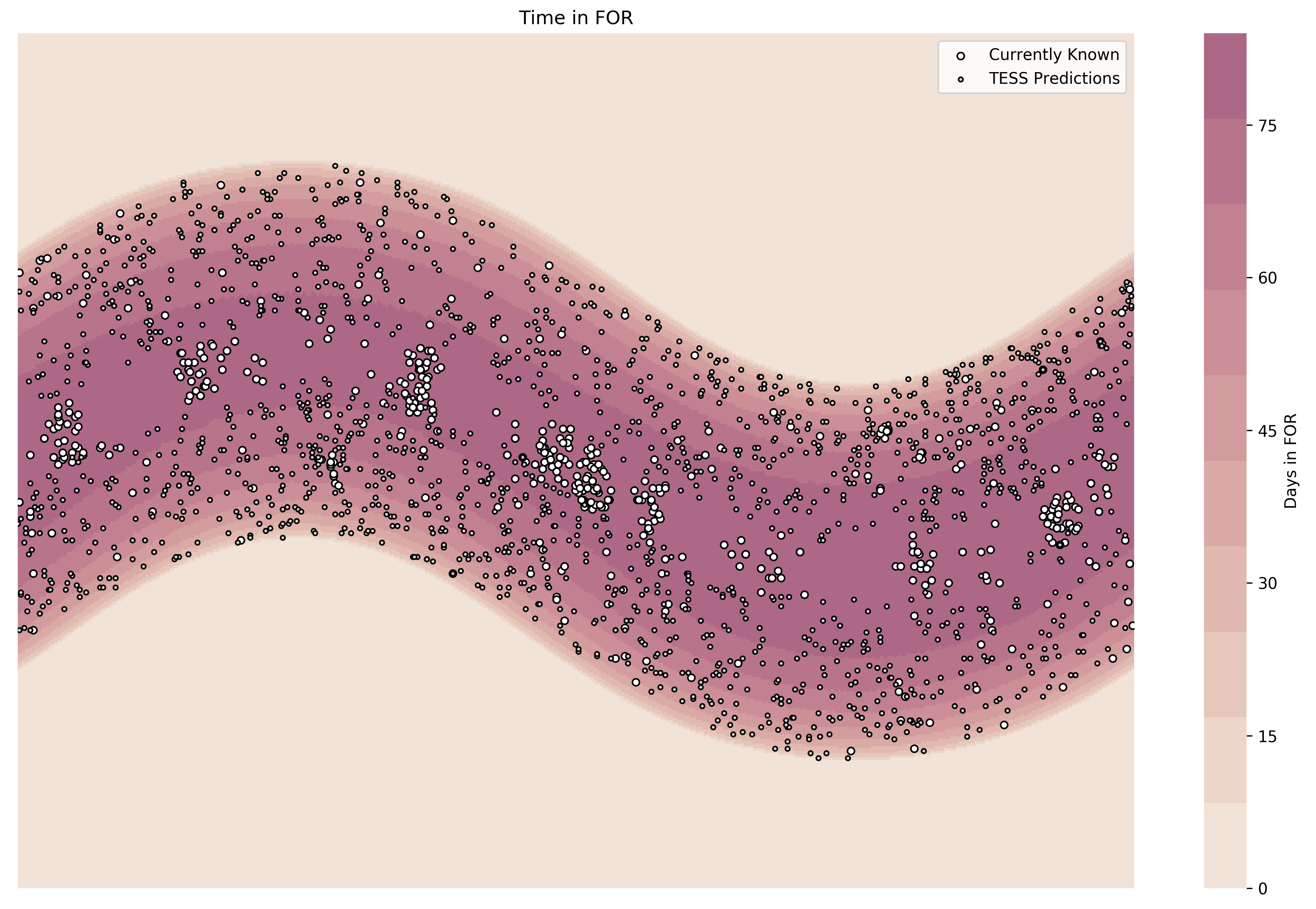 The seasonal variations also cause brief eclipse periods in Twinkle’s orbit, although the duration of these eclipses should not impact the ability of the spacecraft to continue mission operations with the design accounting for this with sufficient battery capacity and a low power payload system. The peak duration of the eclipse is less than 20 minutes per ~100 minute orbit and the eclipse season is approximately four months in length.

One important consideration is how long a given exoplanet may be continuously observed with Twinkle, as this determines the viability of various science cases for each target. Several hundred potentially observable exoplanets lie within Twinkle’s field of regard. Depending on their position in the sky there will be a maximum duration for which they are visible without obstruction by the Earth. Long, uninterrupted periods allow not only for the observation of a complete transit or eclipse but potentially also permit the planet to be studied for the entirety of its orbit, providing an unbroken phase curve.

When considering known exoplanets in Twinkle’s field of regard we find that a majority (>70%) of targets are available for continuous observations of longer than 24 hours – a breakdown is given in Figure 4. The large number of planets with long continuous observation periods is due to many discovered planets being located close to the ecliptic plane, largely thanks to the K2 mission.

The coverage of the sky closely repeats each year and for a given target there will be a well-defined revisit time where it will be possible to review scientific data and evaluate the continued observation of target. For a target on the ecliptic the revisit time will be approximately 285 day. 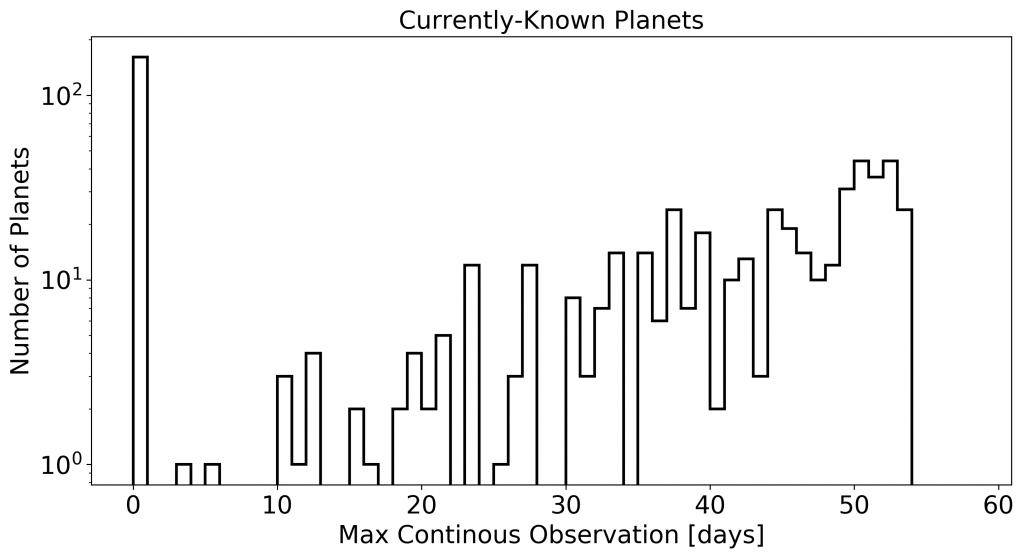 Figure 4: Maximum continuous observation time for known planets within Twinkle’s Field of Regard to a granularity of one day. This chart does not account for stray light limitations, which will be quantified for the day and night Earth limb during Twinkle’s detailed design phase (Credit: Twinkle/Blue Skies Space).

Twinkle is optimised for bright exoplanet targets on short orbits, but it can also observe more challenging targets. All current known targets are captured in Twinkle’s exoplanet catalogue and new targets will be added as they are discovered by other missions and surveys. 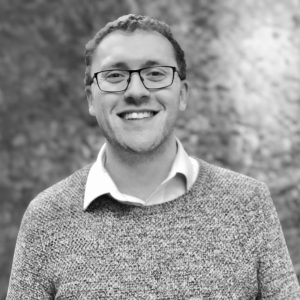 Ian leads the technical development of the Twinkle mission working on spacecraft and ground systems. As a System Engineer, Ian works closely with our industrial partners in developing the design. Ian previously worked for Surrey Satellites as a Lead Systems Engineer across multiple LEO missions and constellations.