Revolution Slider Error: Slider with alias other2 not found.
Maybe you mean: 'home-slider-multi' or 'BSSL' or 'conference-slider' or 'other'

This is the second blog in a series of posts discussing the key technical considerations of the Twinkle spacecraft design. This edition will present the major changes to the design: the pointing methodology employed, the thermal solution and the modifications to the optical design, which include a reduction in complexity, and changes in the resolving power of the instrument and the wavelength range coverage. This piece will highlight the progress made in refining the Twinkle baseline as the mission enters a mature stage of technical design.

The pointing performance of the spacecraft is a key parameter that determines the jitter noise and the viable resolving power (the ability of a spectrometer to separate two wavelengths) of the instrument. Different pointing solutions were identified and reviewed against their impact on the scientific analysis. The previous design employed a Fine Guidance Sensor (FGS) as the pointing solution. However, despite providing the finest pointing performance, its capabilities depend on the total flux delivered to the FGS, ultimately resulting in fewer photons available for science analyses, and the inclusion of a FGS would also result in a gap in the wavelength coverage. The updated design will carry forward a gyroscope configuration. This was determined to be the optimum solution after analysing the influence of its jitter on the performance of Twinkle, including examining spectral retrievals across a range of target exoplanets and atmospheres. An example of this analysis, performed on the well-known reference exoplanet HD 209458 b, is shown in Figures 1 and 2.

Figure 1: Simulated results of noise contributions with a selective readout aperture and conservative gyro pointing performance for HD 209458 b. 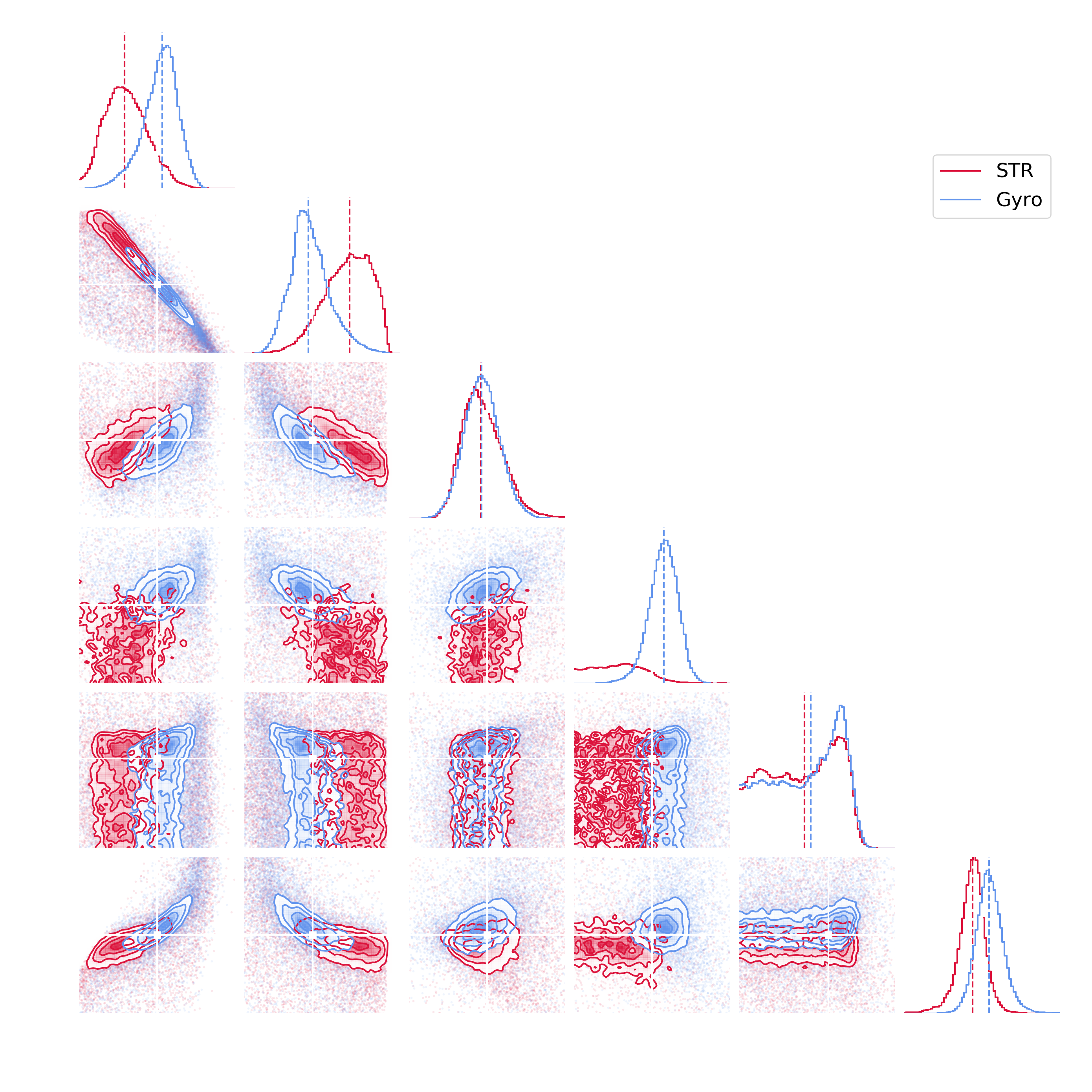 The three key thermal parameters that drive the scientific performance of the mission are the temperatures of the optical chain, the inner sanctum and the detector. The Sun and the Earth are the primary sources of flux to reject. To negate the solar flux, a number of different thermal configurations were explored whilst considering the attitude allowance of each thermal solution. Additionally, the selection of a Sun-synchronous orbit helped to constrain the Earth-Sun-Spacecraft geometry and hence the impact of the Earth flux on the spacecraft design. To combat these fluxes, a series of Sun-shields were considered, with the telescope either side-mounted or top-mounted relative to the spacecraft bus. The top-mounted orientation was selected for mechanical considerations after no significant thermal preference was identified between the two options. Furthermore, passive and active thermal systems were assessed. The results of the analysis, which included assessing the passive system for anti-Sun pointing and other attitude cases, indicated that a passive system would be a marginal design solution. Therefore there was insufficient confidence to carry this forward as the baseline, with the design instead making use of an active cooler. Analysis has been performed on low cost, low lift, cryocoolers which have been incorporated into the design. These refinements made to the spacecraft design will provide the required low temperature and thermal stability for the detector.

The updated industrial design now consists of two channels, with continuous wavelength coverage from 0.5–4.5μm with a split at 2.43μm. This is a departure from the previous design, which maintained three separate channels and where some light (1.0–1.3μm) was sequestered to the FGS. The key parameters of the old and new designs are shown in Figure 3.

Figure 3: Comparison between designs, including spectral channels and pointing method.

The optical design has been simplified further by replacing narrow science and background slits with the use of a wider field stop. Furthermore, the optical paths of the channels have been consolidated onto a single detector as opposed to two separate spectrometers, now with only two diffracting elements as opposed to three. The detector on the optical plane is baselined as the Teledyne H1RG detector; its performance is established and it is often used for astrophysics applications. By utilising one detector and a single optical plane, the complexity of the design has been reduced.

The most demanding application of the Twinkle mission is performing transmission and emission spectroscopy to characterise exoplanetary atmospheres. The results of comprehensive analyses and consultation with scientists interested in Twinkle highlighted the potential for a reduction in resolving power of the instrument. The previous resolving power of 250 for wavelengths shorter than 2.43μm was found to be unnecessary for the science cases under consideration. Through a series of simulated spectral retrievals, it was determined that a resolving power of 20–70 would recover the key spectral features effectively. In addition to helping constrain the design and avoid over-engineering the mission, this analysis and resulting reduction in resolving power also allowed for a more appropriate selection of the pointing system and field stop, and the identification of more cost-effective solutions.

Overall, the thorough analysis of the Twinkle spacecraft design in the industrialisation phase of the mission has enabled a simplified new design to be implemented, whilst increasing the spacecraft’s potential for observation of exoplanets and asteroid populations.

With thanks to George Meddings for his contributions to this article.